Our James Hallam Watford branch have been busy with fundraisers the past week.

They kicked off with a sponsored walk last Thursday, for Watford Sheltered Workshop. “It was a 2.5 mile walk around the town, with service users and volunteers of the Workshop.. ending in the pub!”

Next up was a team called ‘The Risk Factor’, which entered into The Big Charity Sports Event, in aid of the WFC Community Sports Trust and Herts Inclusive Theatre. Despite dismal weather conditions and some equally dismal physical conditions, they came a very solid 2nd place, winning the space hopper race and tug of war rounds.

The last up was the weekend’s Croxfest, which is a local community festival attended by over 8,000 people and where James Hallam were one of the many local sponsors. It’s been running for 5 years and aimed at giving upcoming and local bands a festival platform- it’s run by volunteers and as well as supporting local charities, profits are put back into making the event bigger and better the next year. 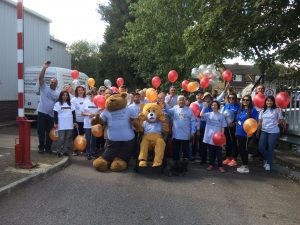